What are the key policy and funding challenges that need to be overcome to support climate resilience and food security in fragile and conflict-affected pastoralist regions? Find out how SPARC highlighted these obstacles, and ways to overcome them, at UNFCCC COP27. 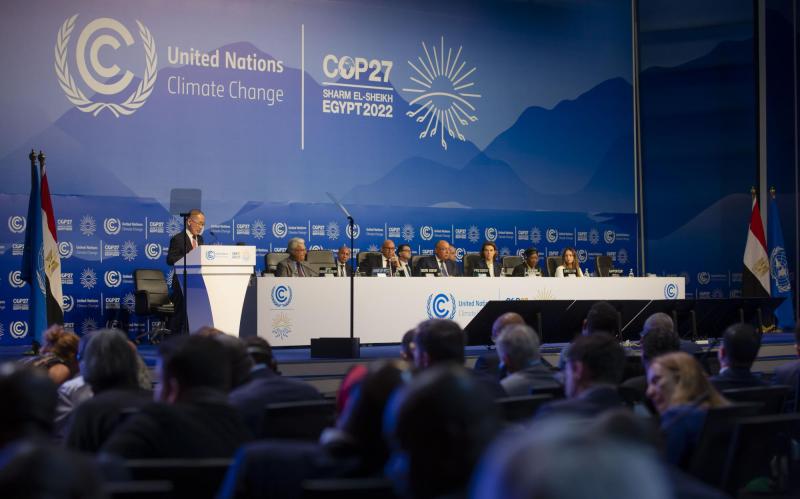 The United Nations Climate Change Conference of the Parties - COP27 - was a key opportunity for governments, donors, practitioners and knowledge brokers to stimulate action to achieve the ambitions of the Paris Agreement and the UN Framework Convention on Climate Change (UNFCCC).

Here you can learn how SPARC led the debate during a series of events on climate finance in fragile and conflict-affected regions, anticipatory action and early warning, disaster risk reduction, humanitarian action and adaptation.

His Excellency Ahmed Mathobe Nunow, Somalia’s Minister of Agriculture and Irrigation, explained how his country's fifth failed rainy season is leading to acute food insecurity and internal displacement. "It should be evident that we need to build the resilience of rural communities in the face of continued climate crises."

Dr Rebecca Nadin, SPARC Risk and Resilience Advisor, said: “…we aim to demonstrate that we cannot rely on humanitarian finance as the sole response to climate-induced crises: we need to crowd in more resources to scale up anticipatory action, and implement long-term investments for disaster risk reduction and adaptation, to protect people's lives and livelihoods in the face of current and future disaster and climate risks.”

Zinta Zommers, Humanitarian Affairs Officer, UN OCHA, discussed how the organisation is adapting to release finance quickly in advance of disasters: "We want to make sure we can mobilise funds in four hours, not six years."

Rt Hon. Lord Zac Goldsmith, Minister of State for Asia, Energy, Climate and Environment of the United Kingdom, said that “Too often, there has been an absence of early intervention... The UK is fully committed to stepping up.”

Dr Rebecca Nadin, SPARC Risk and Resilience Advisor, said: “…It is not only about the additional finance that is so urgently needed... we [also] need to use the resources we do have more effectively: this means banks and climate funds must embrace higher-risk projects, and not shy away from areas which lack rigorous, systematised data - something which is true of many conflict-affected areas. But it’s also about raising the political will to deal with these complex, transboundary risks. Without the political will, our current mechanisms for climate finance will continue to be characterised by low-risk appetites and cumbersome and inflexible requirements - all of which makes it harder for organisations across different sectors to work together.”

Patrick Youssef, Regional Director for Africa at the ICRC, said: “We must review how financing mechanisms are governed, and provide the right assurances to those actors to intervene. There are already examples of this, e.g. how the World Bank became involved in the 2017 famine in Somalia.”

His Excellency Ali Bety, High Commissioner of the Nigeriens Nourishing Nigeriens (‘3Ns’) initiative, spoke about the initiative, which is organised by the Government of Niger, engages local communities on the ground to build resilience to climate change. He emphasised that maintaining dignity should be a critical starting point for similar initiatives, and that the 3Ns initiative supports people to remain where they are. He said that from a policy perspective, the key reasons for the initiative’s success were: being able to ensure coordination across Ministries, so there was no redundancy or overlap of roles; and having strong policies in place, so that when the external context is changing, the initiative has a strong framework to enable them to carry on.

Catherine Simonet, Climate Change and Adaptation expert at AFD and SPARC consultant, explained that the agency increasingly recognises the importance of working on cross-cutting issues across the humanitarian and climate sphere. AFD already has a dedicated fund for peacebuilding and disaster risk reduction, Minka, which is looking to expand into climate adaptation work.

Key messages from the event

Estimates of the cost of implementing Nationally Determined Contributions across the UEMOA region are high: US$79.1 billion is needed between 2020 and 2030 for adaptation and mitigation. However, climate finance flows to the UEMOA region were only US$3.5 billion (4% of what is required), leaving an enormous gap to be filled.

The small proportion of climate finance that is reaching the UEMOA region is largely in the form of repayable loans (75%), while grants represent only 25% of climate funds, adding to the growing budget deficit in the UEMOA region. Alternative and innovative financing mechanisms, such as debt for nature swaps, are a potential solution to fill the gap.

Access to climate financing remains a big challenge, with panellists noting the difficulty in achieving accreditation from financial institutions, such as the GCF or Adaptation Fund. Capacity building needs to be core to the solution for scaling up climate financing in the region. In addition, designing more flexible mechanisms for accessing climate finance that better respond to the needs and capacities of actors and institutions is needed.

Colette Benoudji, SPARC People and Societies Team Lead, spoke to the challenge of fragility in fragile and conflict-affected states, noting how the deterioration of land and water resources, political instability, and conflict are compounded by climate impacts such as floods and drought. Women and girls are at the centre of these impacts in communities, she added.

Nick Bridge, Special Envoy for Climate Change, Government of the UK/FCDO noted the UK’s commitment to triple climate adaptation finance at COP27, while recognising the massive need for adaptation financing, and that climate finance is not reaching the most fragile places. He added that addressing this gap is a key lesson and take away from the event.

Srilata Kamilla, Head of Climate Change Adaptation at the Global Policy Network Bureau of the UNDP, noted that climate finance has been inadequate, and woefully inadequate in reaching fragile and conflict-affected states. She added the vital role of social protection and development in supporting and sustaining long term adaptation and peace-building in fragile communities. 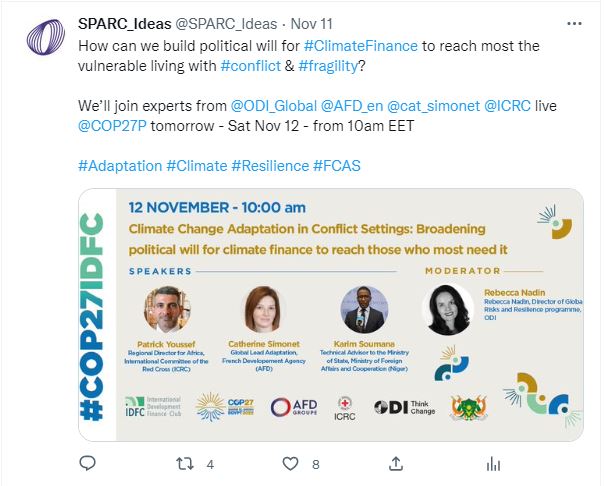 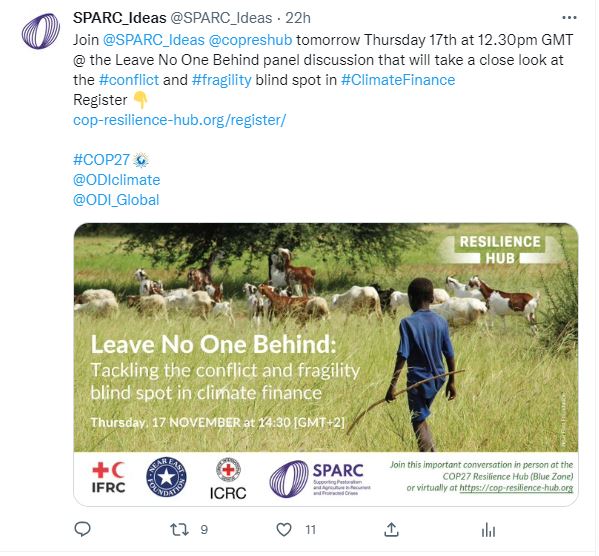