In the Greater Horn of Africa, one in five people have livestock, and pastoralism is enormously important to the economy. It is also, however, a highly risky activity, with increasingly frequent droughts in combination with other crises causing severe problems for pastoralists and agro-pastoralists. Traditionally, governments and humanitarian organisations have often stepped in to assist pastoralists and farmers of the region in the wake of such crises. However, in recent years these actors have begun exploring ways to provide support before crises occur, to mitigate their effects or even prevent them altogether. Early experiences show that such anticipatory action can provide communities with a buffer to prevent damage, enable people to protect their families and livelihood assets, and reduce disruption from climate extremes and other shocks.

Can this anticipatory action approach become a key strategy for dealing with future projected climate extremes? Can it help strengthen resilience in the longer run and break the cycle of protracted crises? These and other questions were debated by a panel of experts from ODI, the International Livestock Research Institute (ILRI), SPARC, the International Centre for Humanitarian Affairs (ICHA), the IGAD Climate Prediction and Applications Centre (ICPAC) and the UN Food and Agriculture Organization (FAO) at a virtual event held on the November 3, 2021 by ODI at the COP26 Resilience Hub.

What does anticipatory action look like in practice? Examples discussed during the event included index-based livestock insurance that aims to protect assets by triggering pay-outs on the basis of a pre-agreed index before livestock is lost to drought. The FAO has worked to tackle desert locust swarms before they caused widespread crop losses, and offers input support combined with cash transfers to help farmers and pastoralists cope with upcoming expected droughts.

"[In Kenya], in both the short rainy season drought in 2016 and the long rainy season drought of 2017, people who received a payout [under the Kenya Livestock Insurance Program] did spend their money on various livelihood and livestock saving measures for example food, they paid off debt, they bought forage and fodder, they got water for their animals"
Polly Ericksen, ILRI

However, such anticipatory action programmes are still small-scale and fragmented. They also operate in a very challenging environment. In Somalia, pastoralists and farmers face multiple and protracted crises, including conflict and frequent droughts, floods, desert locus swarms, and now COVID-19, which have depleted many people’s capacity to adapt and prepare for what’s coming, while at the same time also responding to the situation at hand.

The speakers emphasised the need to strengthen early warning systems that are needed to underpin anticipatory action by governments and humanitarian organisations, but also to directly reach farmers and pastoralists in at-risk areas. The information provided by these systems must be tailored to user needs and where possible co-created with the users. It should take the form of actionable advice rather than raw climate data or simple warnings. For example, pastoralists may need to know whether sufficient water and forage is expected to be available for their livestock, and farmers may require information on the best crops to plant based on rainfall projections for the coming season. This advice must be provided early enough to allow users to act upon it, but not so early that projections are unreliable, or not yet relevant for the decisions people are taking about their livelihood activities at that time. Improving early warning systems to build long-term resilience requires close cooperation between information providers, users, and experts in the field, from the local to the national level.

"More than the climate information per se, what is required for advisory services is a discussion between the provider and the user."
Dr. Zewdu Segele, ICPAC
"Data sharing is key for anticipatory action - you need more than just an early warning system, you also need information on the local population, migration and many other dynamics."
Oscar Lino, Kenya Red Cross Society

Experience has shown that even when good forecasts are available, they do not automatically lead to action. The humanitarian community is still structured to respond to evidence of damage already done rather than to probabilistic forecasts of future damage. East Africa has suffered two consecutive failed rainy seasons, yet very few investments in anticipatory action have been made. The region is now on the brink of a major emergency, which could have been mitigated with effective anticipatory action.

The speakers identified several measures that should be taken to better connect early warning systems to anticipatory action. Firstly, more reliable and sustainable funding needs to be made available, including by mobilizing the private sector. Secondly, multilevel coordination must be improved, connecting local communities to national processes and ensuring that local voices are heard. Thirdly, systems guiding anticipatory action must be institutionalised at all governmental levels. This will require capacity building for users and decisionmakers to help them interpret information produced by early warning systems, and translate it into action. For recurrent problems such as droughts, clear, transparent thresholds must be established that reliably trigger action, and standard operating procedures should be defined to guide that action.

“Communities affected by climate shocks have ideas that have never been explored. [They] should have a voice on when is the right time to act.”
Dr. Ibrahim Dagane Ali, Hexagon Consulting Somalia and SPARC
“We need to move from these small pilot projects that we're seeing right now to a fully upscaled and institutionalized approach within the region. We can no longer continue to expect large-scale results from small-scale investments.”
Brenda Lazarus, FAO

If you would like to watch the entire discussion, keep an eye out for updates on the recording, which you can watch by logging into the Resilience Hub virtual platform in the coming days.  If you haven’t yet registered on the platform, click here to do so here. 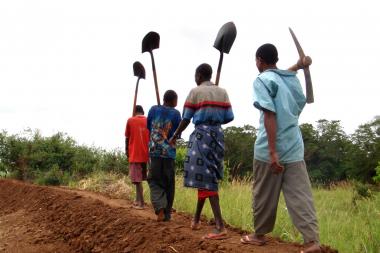 Understanding the role of anticipatory action in Somalia

This brief is the first part of a series highlighting learnings that are emerging from a longitudinal study on anticipatory action in Somalia.
- We value your feedback about the SPARC website. Please can you take 20 seconds to answer these quick questions?