Ministers urge more collaboration to support pastoralism in the Sahel

Leaders from the Executive Secretariat of the G5 Sahel and Reseau Billital Maroobe (RBM) urge policymakers, practitioners and donors to collaborate more to support pastoralists in the Sahel.

Leaders from the Executive Secretariat of the G5 Sahel and Reseau Billital Maroobe (RBM) have met to urge policymakers, practitioners and donors to collaborate more to support pastoralists in the Sahel.

As pastoralists in the region face growing challenges that are aggravated by insecurity and conflict, decision makers met in Niamey, Niger, in early June. Mohamed Bazoum, President of the Republic of Niger, is ambassador on behalf of pastoralists in the sub-region and to the African Union.

A ministerial session held by Tidjani Idrissa Abdoul Kadri, Minister of Livestock and Spokesman for the Government of the Republic of Niger, aimed to define a common vision of pastoralism that takes into account the region’s political complexity and recognises the instrumental role pastoralism plays in the region’s economy and way of life.

Ministers highlighted that pastoralism has strong cultural and economic significance in West Africa and the Sahel, providing jobs, growth and contributing to the reduction of food insecurity and poverty in rural areas.

They also voiced concern over areas affected by unprecedented levels of insurgency and armed conflict, and the impact this has on pastoral mobility, including reduced access to resources for pastoralists and a structural loss of income.

Ministers supported efforts made so far to address the crises pastoralism faces in the region, saying: “We take note of the efforts made by States, intergovernmental organisations and development partners to mitigate the effects of multiple crises on pastoralism.”

However, they added that more collaborative effort is needed to address the complex nature of the challenges faced. They said: “These crises are multifaceted and complex and holistic, inclusive solutions must be deployed to make it possible to amplify the efforts made by all the stakeholders.”

Their recommendations included that: 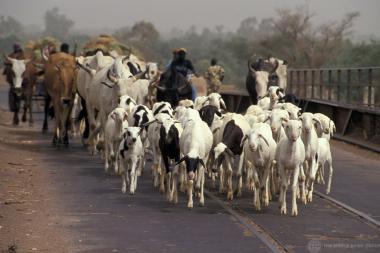 Stabilising the Sahel: Livestock as a driver of regional integration

This brief outlines ways to build the resilience of livestock markets in the Sahel to climate and conflict shocks, thereby improving their contribution to livelihoods, food security and the economy.